Roscan Gold is the stock that I think will be The Next Big Discovery in the mining world.

And it couldn’t have come at a better time, with gold breaking out above 5 year highs.

As I explain how CEO Greg Isenor and Director Dave Mosher have discovered over 10 million ounces of gold – with two of those assets now in production, you’ll probably gasp when I tell you this stock is trading at… 20 cents.

Twenty cents.  And here’s what they have:
1. They’re surrounded by some of the highest grade & most profitable gold mines in the world
2. With a cashed up treasury,
3. Two sets of great drill results already released
4. That caused a group of Smart Money to buy the last financing
3. Drills turning now

In a good gold market like we have now, and a Tier 1 team who have built and sold juniors before – the Market will instantly reward this stock it it hits a major multi-million ounce gold discovery.

The next set of drill results will be out in weeks.  Gold stocks are SO cheap, there is a BIG and EASY jump in them when they hit good results. Roscan Gold has a legitimate shot of being a MAJOR WIN before the end of 2019.

In this gold market, it will only take one press release.

Roscan is now drilling at its Mali (West Africa) based Kandiolé Project.  The West Mali Gold Belt has more than 35 million ounces of HIGH GRADE gold discovered – making it one of the most profitable regions in the world, with four HUGE mines operating right around Roscan’s Kandiole.  In fact, one of these mines is quite possibly the single most profitable gold mine in the world right now.

Of course, in a good gold market you own mostly the senior producers.  But Roscan is more than “a cheapie with a chance” as I’ll explain – this company has followed the rules of Discovery Investing to a “T”.

They’ve found and sold mines – that are producing today.  They own 25 million shares of Roscan. They’re in one of the highest grade gold belts in the world. There’s money in the bank and they are drilling NOW.  It ticks all the boxes for Discovery Investing.

And personally, I think a major discovery here is a matter of time – which is why I’ve loaded my portfolio up with Roscan shares right now. See if you agree.

CEO Greg Isenor has already made two major gold discoveries in the West Mali Gold Belt with the Siribya and Diakha deposits, which are now owned by IAMGold.  In fact, Siribya is right beside Kandiole, the property that Roscan is drilling on RIGHT NOW.  So when I tell you Isenor is an expert in this prolific gold belt, believe it. This man finds multi-million ounce gold deposits! And he finds them right here!

Before those two discoveries, Isenor also led the team that discovered the 5 million ounce Bissa gold deposit in Burkina Faso, also in West Africa.  It is now a producing mine operated by Nord Gold, a private Russian producer.

After 15 years in West Africa and 10 million ounces of gold under his belt, Isenor knows this region better than anyone else on the planet.

Kandiole is a project that Isenor has wanted to get his hands on so badly – for a decade – that when it came available, he had to commit the first $750,000 personally because the gold market was so bad at the time.  And he’s kept buying shares in the open market when he wasn’t in blackout periods.  At 20 cents, that tells me all I really need to know.

Under Mosher as CEO the market capitalization of High River Gold Mines increased from $7 million to more than $1 billion before it was acquired… CHA-CHA-CHA-CHING!!!

Mosher took three mines fully from exploration through to production at High River – including a mine in West Africa that is exactly like what the Roscan team sees at Kandiole.

All together the leadership group of Roscan has discovered almost 10 million ounces of gold through projects that are now producing.  And they’re drilling for their next one RIGHT NOW at Kandiole.

They’re considered such a sure bet by the Street, that more than 40% of Roscan’s shares are held by institutions. You NEVER SEE THAT for a junior miner of this size.  The Smart Money already owns the stock.

That credibility means that as soon as Roscan hits – the Market will reward them instantly, because the Street knows that Roscan’s leadership group can monetize a discovery.

That is why The Big Pay-Off here is potentially in months – not years.

The West Mali Gold Belt is one of the the most productive greenstone gold belts in the world.

There are multiple 5 million ounce plus properties here, including:

The region is loaded with gold to the north, south, east and west of Roscan. 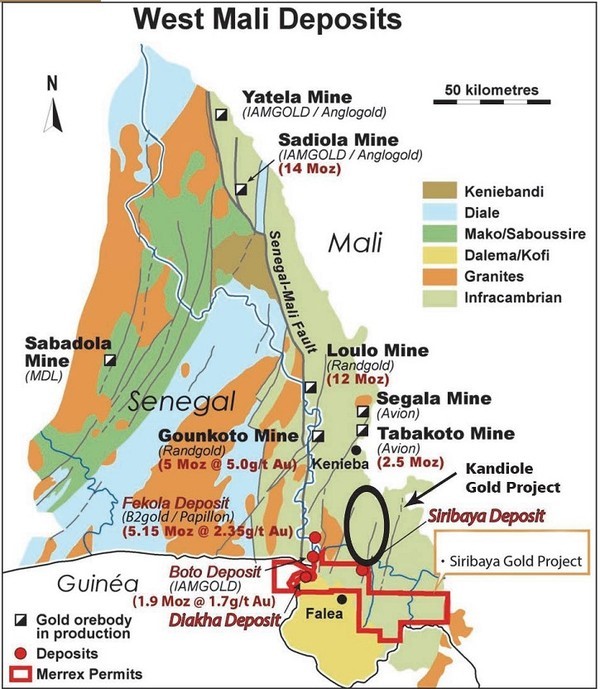 These 5 million ounce plus projects aren’t just big – they are also extremely profitable.

B2gold’s Fekola Deposit – in production right beside Roscan – is the 2nd lowest cost mine in the world with production of 400,000 oz gold or more.

When I say best-in-the-world economics I’m not joking.  The table below details the AISC for the top gold miners in the world for 2018.

None of them even come close to $532/oz AISC of Fekola – an asset that could be a sister discovery to what Roscan may find.

What Are Five Million Ounces Of Gold Worth?

Mali is already home to several 5 million plus ounce discoveries, plus many more that are 1 million or higher.  They are all around Roscan.

It’s easy to see a 5 million ounce discovery in the stable gold mining region like Mali being worth $100/oz – B2Gold paid $108 per ounce to acquire Papillion immediately after discovery.

The table below shows you the price per ounce at which transactions have been taking place – the average and median both point to $100/oz.

$100/oz means that a 5 million ounce hit here for Roscan would be worth at least $500 million for a company with a market capitalization under $20 million today.

Being conservative – even if Roscan ends up with a share count of 200 million as it brings this discovery towards production we are looking at a company that could be worth:

With a current share price of 20 cents the upside here is HUGE.

With one of the best exploration teams in the world – certainly in West Africa – working for me, I can see shareholders making millions in a hurry just to fairly value a discovery – there is more upside as the team takes this towards development.

Even if Isenor’s discovery turns out to be considerably smaller, Roscan investors will still do very well; with producing gold mines operating nearby even a 700,000 ounce discovery will be very valuable and worth far more than the current share price.

THE CONCLUSION IS OBVIOUS

Gold has broken out to a five year high!!  Because gold shares are SO cheap, there should be a fast and dramatic, first swing up.

I showed you charts of junior gold stocks that even in a bad gold market, made millionaires out of retail investors within weeks. It’s a fact: when a junior discovers a major gold deposit, the stock soars.  It is THE reason to invest in junior mining.

Now, with a GREAT gold market, the upside and frenzy should be even better.

On top of that, this tiny company already has huge institutional ownership – more than 40 percent of Roscan’s shares are institutionally owned. So the float on the stock is much smaller than you think.

To me, that means that when the retail money finds this stock, the upside here will happen spectacularly fast.  This is what investing in the juniors is all about. I didn’t mortgage my house to buy this stock, but I put enough in it that it will make a difference in my life if they hit.

Roscan looks just like High River Gold was before Roscan Director David Mosher took it from a market cap of $7 million to the more than $1 billion… on the back of another West Africa gold mine he discovered.

That is the upside potential.  The timeline to see that upside really isn’t a mystery.  Roscan is fully funded to drill constantly for this entire summer.

Drills are turning now.  Drill results will be steady for the next few months. All it is going to take is one little positive press release and Roscan’s stock could make investors at this price level very, very rich. That’s why I’m long ROS-TSXv.

Keith Schaefer is not registered with the United States Securities and Exchange Commission (the “SEC”): as a “broker-dealer” under the Exchange Act, as an “investment adviser” under the Investment Advisers Act of 1940, or in any other capacity.  He is also not registered with any state securities commission or authority as a broker-dealer or investment advisor or in any other capacity.