THIS IS NOT YOUR REGULAR SILVER RALLY

Some investment trends smack you right in the face.

This is one of them…….and you are quickly going to understand why.

The Netherlands, one of the leading nations in the transition to renewable energy, recently commissioned a study through the Dutch Ministry of Infrastructure and Water Management.

The study aimed to assess the future availability of the critical raw materials required in making the Dutch transition to solar and wind power.

Six critical metals were identified by the Dutch.

Today we are focusing on one of them———SILVER.

What the Dutch study revealed about silver blew my socks off.

It revealed that—for just The Netherlands to make it’s planned transition to renewables—would create demand for silver that would be two and a half times today’s ENTIRE GLOBAL SILVER PRODUCTION!!!

Re-read that sentence. Let that sink in for a moment.

The Netherlands.  Home to 18 million people.  Representing 0.22% of the total human beings on the planet———the silver demand from this tiny country that has fewer people than some cities, by itself is going disrupt the global silver market with its renewables effort.

My first thought was…how have I never heard this before?

My second thought was how do I get some serious leverage to silver prices going higher?

Silver demand in the Netherlands study is all about solar panels.  Silver is the most conductive metal, superior to aluminum, copper and gold.  Every solar panel uses silver.  That is why silver is an essential metal in the renewable transition.

The Netherlands has roughly 8 million private households——so that is what those solar panels driving silver demand will be attached to.

Now consider this…US President Joe Biden wants to install 500 MILLON SOLAR PANELS over the next five years.   With an average house requiring roughly 30 solar panels that means Biden wants to slap solar panels on 16.6 million American homes——which is more than twice as many homes as the entire Netherlands has.

If the tiny Netherlands study showed that their solar panel silver demand was 2.5 times total production…….then just imagine what Biden and every other government that has a Green Recovery Plan coming out of COVID are going to do for silver prices.

A Paradigm Shifter For Silver……
Every once in a while, you come across a no-brainer moment—and this HAS TO BE a no-brainer moment for silver.  That Netherlands study is just mind-blowing.Solar panel demand was already starting to be disruptive to the silver market. In 2019 solar panel demand used 11.8% of global silver mine production——that is a double from the 6.1% of silver production that solar panels consumed in 2015.How many houses across the planet are going to have solar panels installed over the next five years as trillions of dollars of Government green subsidies are rolled out?

Meanwhile, silver production has declined every year in the past four years and in 2020 is expected to be 10% below the 2015 level——demand is up, supply is down.  I swear I can hear the screws tightening and starting to squeeze the price of silver higher.

Silver is now attracting all the speculative fervor in precious metals. The crazy Netherlands study conclusion makes it so painfully obvious that the growth in silver demand is about to start increasing exponentially.  This is an investment trend that is as PLAIN AS THE NOSE ON YOUR FACE….

You and I have figured that out.  The market is figuring it out too.  With the leverage to this silver squeeze being with the junior producers that is where the market is starting to look. 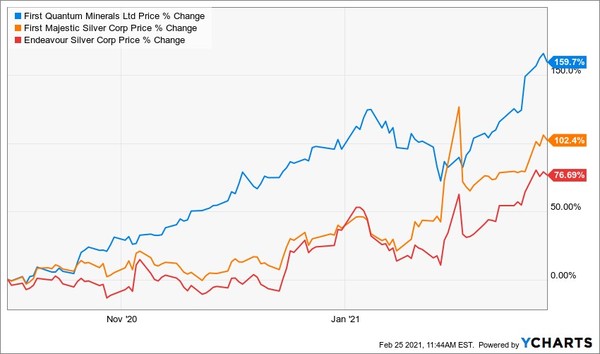 There is now a big appetite for junior silver stocks—which is absolutely perfect. Why? Because I’ve spent three decades getting to know every good junior mining team on the planet.It just so happens that I know just the silver junior for this moment in time.You dear reader know this team too——and you love them, because we have made some major money with this group multiple times.  I am convinced that with this silver market we are about to again.

Silver is already hotter than gold now. There couldn’t be a better time to bring a well-structured silver company to trade—especially if it’s by a team that knows how to use their stock as currency to do M&A.

That is what this team, one of the Top Mining Teams—is now doing—with an amazing land package in Zacatecas Mexico, one of the most prolific silver districts in the world.

The location of the asset is right in the middle of the country. There are many historical showings, it is a former producer, and there’s a mill nearby.

But most importantly—silver market has gone crazy…and this company raised its cash last fall as a private company.  So the stock price is going to have some serious catch up to do here!

You Could Launch Five Separate Juniors With These Assets
Sometimes these deals seem to come fast and furious.  The truth is that they all take a lot of work and patience to get to this point.This team has spent a long time looking at silver assets.  In fact, when they were doing so it was with their contrarian instincts—because silver was very much out of favor at the time.  You can see in the long-term price chart that silver has been dead for five years before now surging back to life in 2020. 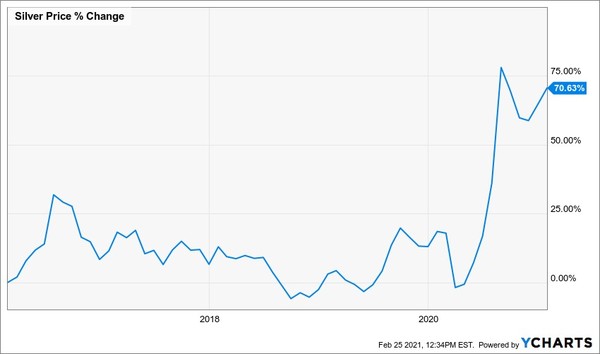 For their contrarian silver hunt, they brought in a PhD geologist based out of London, an ex-Ivanhoe man who they put in charge to vet silver assets.  I know the man, he is a technical specialist, and brutally honest.His nickname amongst the team quickly became “DR. NO”, because he seemed to take real pleasure in ruthlessly picking apart the assets that came across his desk and tossing them aside because he didn’t think they would work.  Hey—that is what you need in this business.  When you are building a company you only get one shot.

You don’t want a yes man in that role.   I’ll be taking the same Dr. No approach when my daughters start bringing young men home for me to meet!!

Finally…after months and months of repeated no, no, no,….the group put this Zacatecas, Mexican asset in front of Dr. No and he didn’t just say yes——he said that the asset looked amazing.

I was lucky enough to have Dr. No walk me through the project via Zoom and I understand the excitement.

For hundreds of years, Veta Grande has been one of those magical, mysterious endowments of silver that created so much wealth of the Zacatecas region.   The roads to this area throughout Mexico became known as the silver paths because of all of the silver going out from the Zacatecas to other parts of Mexico.

The private financing for this stock last fall attracted big names.  The world’s biggest silver name is a major shareholder.  You know of whom I speak, and I can tell you that when this world-famous silver investor researches a project and invests his own money, the entire mining world pays attention.

My opinion—and you get that for free—is that the silver bulls in the market are going to be buying this stock all day long.  The last financing was done several months ago and since that time the silver price has rocketed up.

Do Not Miss My E-Mail Tomorrow!!!
Tomorrow I’m giving you this stock and it is a SILVER BULL SPECIAL.The exact right stock, at the exact right time.The Market is recognizing silver as a cornerstone metal for renewable energy and De-Carbonization. Silver is now ESG-friendly.  Huge industrial demand is meeting a declining USD.  The silver chart is already showing that’s a power combination.  In fact, if this is one of the most bullish charts I see anywhere: 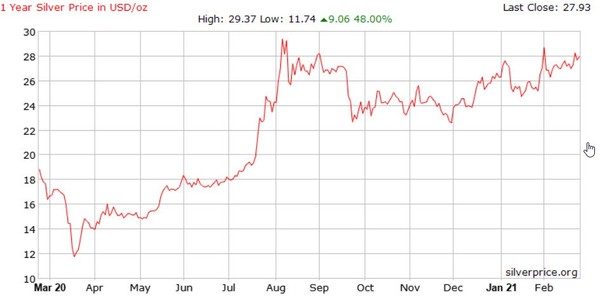 Geologically, there are dozens of known silver veins on the property.  A mining team that’s used to creating BIG valuations in their pubco’s controls the asset.  And this is all happening when a major breakout bull-run in silver has never held more potential   This is the stuff I dream of at night!

The people involved, the management group is Grade A.  They are known to us and known to the market.

They are as credible and successful as you can get.  We already love them because they have made us tons of money.

Institutions love them too—because one of their two big winners in the last 24 months went from 50 cents – $8/share and became one of the most profitable mines on earth, and the other went from 40 cents – $5 in five months.

The shareholder register speaks volumes about the quality of the deal.  The smartest, most influential in the business are in love with this one.

The timing…….I’ll admit is 100% luck.  These guys just happened to bring this silver deal public at perhaps the most bullish moment in the history of silver demand. That wasn’t planned.  But the way it happened–that they purchased these silver assets months and months ago when the rest of the world was paying no attention at all to silver–has set us up very well.

Tomorrow—you get all of the details you need.   I’m thrilled to be able to bring a silver deal of this quality to you.  Especially right now with the silver sector booming…