Every form of energy is going through the roof.  Oil, natural gas, refined products, coal – you name it, if it’s a fuel, it is going up.

Except for one.  Uranium prices, which caught fire in the fall and again during the first few weeks post-invasion, have taken a tumble.

The spot price of uranium traded as  high as $58 per pound in March.  But they have fallen back to below $50 since. 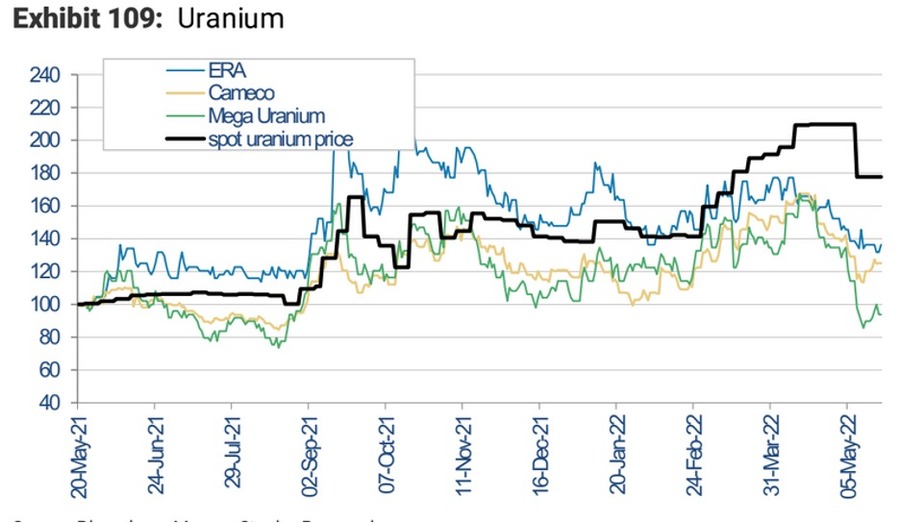 What’s going on here?  Shouldn’t uranium be flying high as we re-evaluate the path to zero carbon while at the same time trying to ban every energy export out of Russia?

Well, it turns out that the Russian invasion of Ukraine is the cause of the slide in uranium prices.   But it’s not what you think and not at all bearish.

HOW THE RUSSIAN INVASION GUMMED UP
THE URANIUM SUPPLY CHAIN

Leading up to the Russian invasion uranium fundamentals were on the rise.

In 2021 and early 2022 utilities were laser focused on shoring up their uranium supply.

Last year, the price of uranium rose by 45%, going from about $29 per pound at the start of the year to $50 per pound in September.

There was a fundamental story that was gaining traction.

The Russians invasion changed that.   How?  It diverted the attention of the utilities to a bigger problem – their uranium conversion and enrichment supply chain.

As an electricity producing fuel, uranium is not like the others.  With coal or natural gas, what you get is what you use.  You buy it and you burn it.

Not so with uranium.  Uranium needs to be processed before it can be used in a reactor.

Specifically, reactors need a particular isotope of uranium – U-235.  Mined uranium has about 0.7% U-235 content.  Reactors need that content to be “enriched” to a higher value – 3% to 7% for most legacy reactors and up to 20% for newer high-efficiency reactors.

The two key processes to make uranium “reactor-friendly” are conversion and enrichment.

Conversion consists of turning mined uranium (uranium oxide) into uranium hexafluoride, or UF6.  UF6 is a gas and a necessary precursor material for the enrichment process.

There are not a lot of conversion plants out there: only Canada, France, Russia and China have them.  There is one plant in the United States, owned by Honeywell (HON – NYSE) and General Atomics (PRIVATE).  But is closed and not expected to restart util 2023.

Most importantly, Russia has 27% of global conversion capacity.

Once converted, the uranium needs to be enriched.  The process of enrichment is essentially taking the UF6 and filtering out more of the U-235 isotope that the reactors need.

There are a few ways of doing this.  Most enrichment facilities today use centrifuges to “spin out” the U-235 isotope.  There is a newer Australian process in development (more on this later) that uses laser excitation to increase U-235.

No one has worried about a shortfall of enrichment capacity.  Until Russia went rogue that is.

And about half of that is in Russia.  Whoops.

Taken all together here you can see the issue.  Russia has 50% of global enrichment capacity.  27% of global conversion capacity.

Cameco’s CEO Grant Issac described it at a recent Bank of America conference:

“Us and our competitors in the industry were seeing a lot of interest in uranium. But that changed also on February 24. Utilities shifted their attention from where’s my long-run uranium coming from to where’s my enrichment and conversion going to come from”

Since the invasion, we have seen a 40% jump in enrichment prices, from $70 to $120 per unit. Cameco described it as “a panic”, saying conversion is “about as hot as we’ve seen it ever”.

But uranium is not forgotten.  It’s just taken a back seat for the time being.

Once the enrichment and conversion capacity has been locked up, utilities will get back to focusing on uranium.

URANIUM WILL COME BACK INTO FOCUS

Uranium has very concentrated production itself.  The top 4 producers have 56% of total production

Russia makes up 14% of worldwide production and about 20% of production that is exported to the United States.

In addition, about 50% of the uranium mined in Kazakhstan (they are the biggest uranium producer in the world) is transported through Russia, via the port of St. Petersburg.

This is all material that goes to Western power producers.

It is a precarious situation.

On the Western end we have legislation pending in Congress to cut-off access to Russian material.

On the Russian end, there are plenty of threats that they will cut it out from their end in retaliation to other sanctions.

The bottom line here is that more Western capacity will be needed to meet Western demand.

While questions surround future supply, the interest in uranium has never been higher.

According to Cameco CEO Tim Gitzel, “things are moving very quickly in our industry, and we’re seeing countries and companies turn to nuclear with an appetite that I’m not sure I’ve ever seen in my four decades in this business.“

It sounds like a recipe to buy the dip.

There are a couple obvious ways to do it.  First, buy uranium.  The Sprott Physical Uranium Trust (U.UN – TSX) is trading all the way back down to where it was before Russia invaded Ukraine. 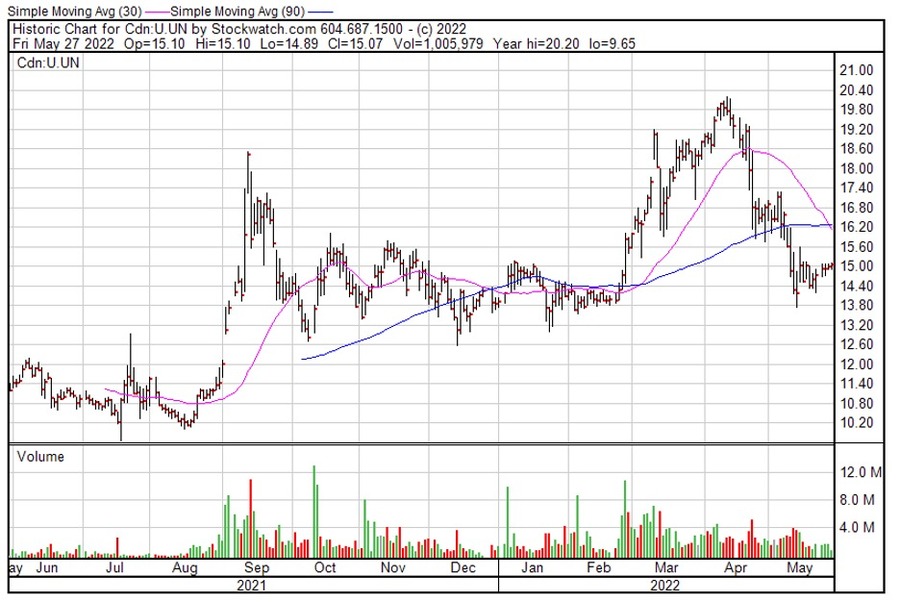 The trust is an investment vehicle for uranium – all of its assets in uranium in the form of U3O8.

The Sprott Trust made headlines last fall when its buying of physical uranium for the fund contributed to a rise in prices, setting off a virtuous circle.  That could happen again.

Second, just buy Cameco.  The biggest western uranium producer.  The only western source of operating conversion capacity.  Cameco stands to benefit from all the steps in the process.  As uranium goes, so goes Cameco.

DOWNSTREAM PLAYS – NOT A LOT OF OPTIONS

These are good ideas, but what I would really like is a targeted play on conversion and enrichment.

It’s a no-brainer that conversion and enrichment capacity will come back to the West.  Companies focused on the uranium supply chain should be big winners.

The trouble is finding the right company to fit the bill.

That’s probably not surprising.  These are niche processes with only a few operating plants.  The whole opportunity is in front of us because so much of existing supply comes from Russia.

There are two public companies with a foothold in conversion and enrichment.

The first and only North American traded one is Centrus Energy Corp (LEU – NYSE).

Centrus looks really good and really bad.  The bad is that right now Centrus is basically a middleman.  They generate revenue from buying enriched uranium from overseas producers and selling it to utilities.

Unfortunately their main supply of enriched uranium is from the Russian company Tenex.

That makes Centrus directly in the site-lines of any coming sanctions on Russia.

The good is that Centrus has a head start producing enriched uranium in the United States.

Centrus operated an enrichment plant in Piketon Ohio until 1997.  Last year, the Nuclear Regulatory Commision (NRC) gave Centrus a license at Piketon to enrich uranium up to 20% (this is called high-assay low-enriched uranium or HALEU) using centrifuge technology.

This is the only license of its kind.  Centrus is in the process of building the demonstration facility.   They said on their Q1 call that they now plan to supplement HALEU production with low-enriched uranium (LEU) production, the type that could be used by existing reactors in the US.

It sounds promising.   But there are more wrinkles.

The DOE partnership originally had a scope that included operations beyond the demonstration phase.

That sounded great – it meant a runway to fully operational enrichment.  But the DOE changed the terms in February, instead splitting the project up into two phases – with the second, operational phase up for another yet-to-come bid.  Centrus says they are well positioned to win this, and well, they should be – but this is government so…

Nothing is certain here.

Maybe the most intriguing thing about Centrus is the recent insider buy.  A director at Centrus recently bought over a million bucks of the stock.  Makes you wonder what they see? 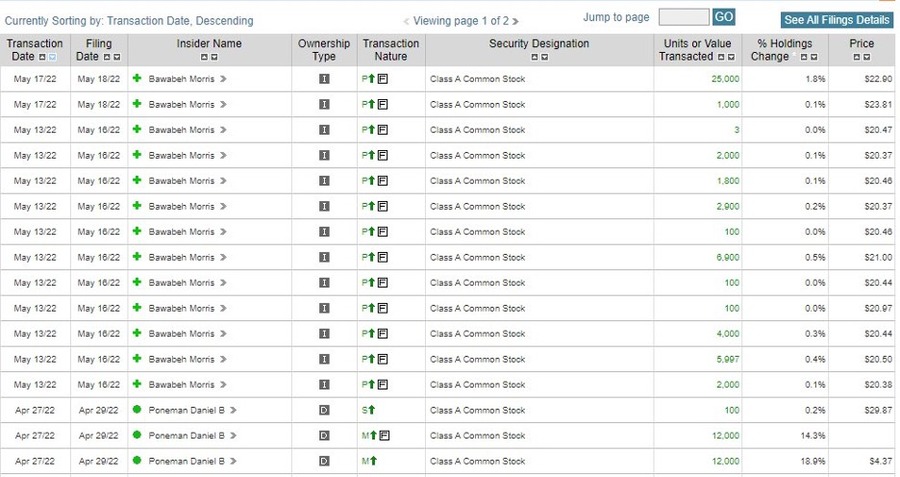 The second name in the conversion and enrichment mix is an Australian company SILEX Systems (SLX – AU).

The strike here is that I don’t invest in Australia.  But if you do, SILEX might be worth a look.

SILEX owns 51% of a joint venture called Global Laser Enrichment (GLE).  Cameco owns the other 49% with an option to increase their ownership to 75%.  SILEX also holds a 7% royalty on revenues GLE makes from the process.

SILEX licenses the rights to use their laser enrichment technology to GLE. This process is more advanced and higher efficiency that the centrifuge process.

SILEX is in the midst of a pilot at its Paducah Kentucky facility, with commercial operations expected in the late-2020s.

Maybe most interesting, SILEX also has announced they plan to bid on the operational phase of the DOE/Centrus HALEU project.  It is worth considering whether the DOE redefined their project scope to allow SILEX/Cameco and their new technology to get in the race.

While both Centrus and SILEX are interesting, both companies are still years from commercial production.

These stocks are a lot like buying a copper exploration project because the price of copper is taking off.  Not usually the best expression of the idea.

While it would be great to take advantage of a seemingly sure bet on onshoring the uranium process, the simpler path is just to buy the uranium dip.

If you want some upside on conversion and enrichment, Cameco can give you that.

Utilities will refocus their attention on uranium procurement soon enough.  When they do, we will be starting at a uranium price that is way higher than it has been in years.

The long-term outlook for uranium looks better than it has in years.

And the chance of an upside surprise, either from Russia banning exports or the West banning Russian imports, could mean a payoff overnight.