The Best Performing Stock of This Century Will Surprise You

Which stock do you think is the best performer in the S&P 500 so far in the 21st century? I can hear your guesses——Google, Apple, Amazon, Netflix. All great performers to be sure.

But they aren’t right…..

The single best performing S&P 500 stock this century is Monster Beverage (MNST-NASDAQ), the energy drink company.  A $10,000 investment in Monster when it came public in 2003 is now worth more than $12 million——Cha-Cha-Cha!!! 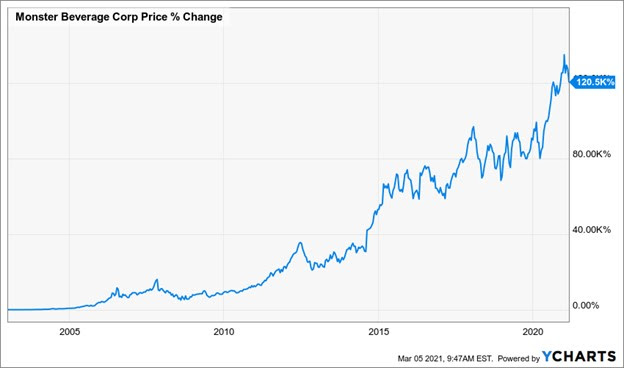 Monster Energy is a monster success because it followed a simple formula:

They were a trail-blazing brand in the new consumer product trend of energy drinks. They conquered a fresh landscape; they won the energy drink “land grab”.

In business school they call this the FIRST MOVER ADVANTAGE: Before other energy products knew the game was on, Monster Energy had massive distribution locked down and was on shelves everywhere.

First-in often wins.  That is why Monster is energy drinks.  Coca-Cola and Pepsi are cola.  Kleenex is tissues.

When a new brand gets rolling, the stock market loves it.  LuLuLemon (LULU-NYSE) — is another; a Vancouver company that hit it big here right under my nose with form fitting clothes made with seaweed.  It’s gone from $2 – $350 in 15 years.

You know what the hot new consumer product trend is for 2021?  Whole Foods (which is now Amazon) said that the #1 trending sales item in 2021 is functional foods.

Look at Celsius—CELH-NASD—as distribution increased for its functional beverage products, the stock has rocketed over the past 12 months. 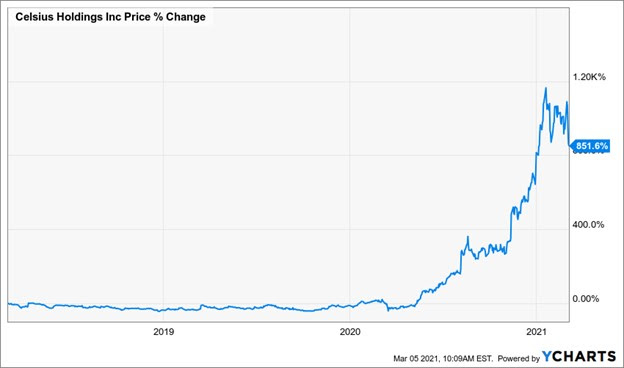 The company and stock I’m introducing to you tomorrow is this kind of company.  Much like CELH, it’s in functional foods—the #1 hot new consumer product trend. Huge industry tailwinds help investors!

But there is no DOMINANT brand; the Market is wide open for a leader to become #1.

The Big Money is Made In The Big Growth Phase


You know what I do—I look at the top trends in the Market and find THE BEST junior team to play that trend.  That’s where investors get THE BEST leverage.

I want to find THE team that can make and market these functional, mushroom-based products into a national brand that everyone recognizes.  It’s huge frontier market.  People are now KEEN to buy these products.  That gives investors the perfect set-up to find another MONSTER-type win.

And tomorrow, I’ll show you the team and the company that I think can give me that.  It ticks all my major boxes: You think I’m being funny but I’m not.  This CEO has a 30+ year track record getting products into national retail chains and taking revenues from hundreds of thousands to hundreds of millions.

His track record says that if he was selling cat food I would buy this stock.  But he’s selling a highly-developed line of functional foods to a market that can’t get enough of it right now.
Other boxes: And perhaps most importantly—this CEO is just starting his growth curve.

Now I don’t know when exactly that will happen.  But I do know this CEO has worked with Crossmark, one of the top brand accelerators in the USA, for years. So it’s only a matter of time.

He—quite simply—has one of the best rolodex’s for national chains in the entire USA. He has the credibility.  He has the track record.

His latest win was being a senior part of the team at one of the Big Winners I mentioned above—Celsius Holdings, CELH-NASD.

Yes, that’s right.  The CEO of this junior ALREADY HAS A MAJOR WINNER in a closely related space (functional beverages).

I sure wish I had bought CELH at $4 last year and enjoyed the 15X—1400%–ride to $64.  I didn’t, but I studied CELH after the fact, and this CEO’s new company—which just listed days ago—has all of the same hallmarks—and more.

I’m thrilled to have followed him and now be able introduce him to you at just the right time, just as his next venture comes out flying in the hot, hot, hot mushroom-based functional product market.

So this CEO’s timing couldn’t be better.

Consumers are ready to make their lives better with what they put into their shopping carts.

COVID has further accelerated the trend of eating to live better…and the interest in mushroom-based foods specifically has been exploding.

Wow, I bet not too many people would have put the opportunity as being that large.
Another study by Food Navigator showed that there has been a recent 800% demand increase for key mushroom varieties.

This CEO’s new company now has the funding to roll out distribution for their functional food product line.
I see it as being in exactly the same situation Monster Energy was with the energy drink market in the early 2000s when demand for energy drinks was ready to explode.

And this company is positioned better than any other that I see.

Those connections are how he was able to help take CELH from $400k in sales to multi-millions of dollars——at CELH he established distribution with industry giants like 7-Eleven, Ralph’s, Costco, BJ’s Wholesale, CVS, Walgreens, Walmart, Rite Aid, Target, Duane Reade, and Stop and Shop.

Do Not Miss My E-Mail Tomorrow!!!


I’ve explained the market potential here.  The leaders of hot new consumer product trends have HUGE stock runs.  This CEO already has one of these under his belt in the #1 consumer product trend (says Whole Foods) of 2021—functional foods.
And he is now putting his entire rolodex and 30+ years of contacts and experience into a micro-cap company, backed by a powerful group of shareholders.
Remember:
1 – Leading consumer brand companies make some of the greatest stock market moves ever.  Monster Energy is the single best stock of this century.
2 – The functional mushroom market is growing incredibly fast and is expected to be a $50 billion market by 2025.  Almost all of that market is up for grabs.
3 – This CEO has proven that he can build a big consumer brand product play.  He is surrounded himself with a proven team.
4 – Newly public, investors have the ability to get in on the ground floor just as his months of preparation and potential can start to be realized.
It’s an exciting time.  You love ground floor opportunities.  I love ground floor opportunities.  This is our next ground floor opportunity…the table is set.
Their products have organic standards, USDA certification, non-GMO which means that winning new distribution points is easy.  As they add more distribution points they provide the market with a steady string of catalysts.
The share structure is tight.  Just 58 million outstanding and the company has money in the bank.
The formula for success is simple.  It’s the same formula that made Monster Energy best performing S&P 500 stock of this century, and Celsius Holdings a 15-bagger in a year.
Tomorrow you get the CEO’s name and all the details of and ticker of this micro-cap functional foods stock.