Yesterday, I detailed fact after fact as to why lithium is the most bullish commodity in the world right now.

When I talk to industry gurus Benchmark Intelligence out of the UK, they see lithium demand increasing 20% per year—CAGR—through the 2020s.

Lithium South is a simple story:

a.    low issued and outstanding share numbers in comparison to peers
b.    well funded
c.    well defined asset at the Preliminary Economic Assessment stage
d.    Chinese partner paying to match their Direct Lithium Extraction (DLE) technology to LIS brine
e.    High quality lithium resource
f.     In a market where lithium prices are rising almost 10% per month
g.    Low market cap for having all of the above

And now you can add one more bullet point—possibly the most important:

Lilac is backed by Jeff Bezos (Amazon), Bill Gates (Microsoft) and Michael Bloomberg (Bloomberg), among others. Their DLE technology eliminates the need for large evaporation ponds that take months from which lithium can condense via evaporation. Ponds also use a lot of precious water and environmentally are not a popular site!

DLE cuts water use down dramatically.  Folks, 99% recovery with very low water use is a GAME CHANGER for this company and possibly the entire industry. While we have to wait for further testing to prove out these initial test results, the technology is off to a great start.

Just so you know my conviction here, I own 200,000 shares and this stock is in my official subscriber portfolio.

With DLE Technology, the Size of
the LIS Asset Could Potentially Double

Every great resource play MUST have a great asset at its base. Lithium South has that with the Hombre Muerto (Dead Man) North salar—right in the middle of the Lithium Triangle in South America.

Hombre Muerto is a Tier-1 lithium project, which means high quality brine with low impurities— and it is located where lithium is being mined today.

Hombre Muerto North has a measured and indicated lithium resource as calculated under NI 43-101, see below

It has some very  interesting preliminary economics put on it already—with the  economics of a NI 43-101 PEA showing an after-tax value of $217 million and an IRR (after tax) of 28%.

Against that $217 million, Lithium South trades at a market cap of $52 million…so a pretty sizable discount for a company that has everything going for it.

BUT HERE’S THE THING–these numbers are based on conventional   technology which requires  large  evaporation ponds.  With new DLE production , recoveries could be much higher than with evaporation And the new technology could allow for more lithium produced in less time.

By the way—the  Korean giant POSCO–with a $20 billion plus market cap–has the southern part of the salar.  POSCO is constructing a commercial-scale lithium hydroxide plant with a projected output of 25,000 tons/year for 50 years.  So everybody knows this salar is one of the best in the world.

And yet…in a market where lithium stocks are starting to rock…NOBODY KNOWS THIS STORY.  No sell-side research, no other newsletters.

I’ve been writing about this for years——the future of lithium is Direct Lithium Extraction.  It HAS TO BE, because we need the lithium supply as fast as we can get it.

DLE has several forms; some use membranes or absorbents to quickly remove the lithium from a salar brine—vs the 12-18 months required for natural evaporation process that has historically been used.

This isn’t kind-of-a-step-change…..it is like going taking a trip from New York to LA on a private jet versus riding on a donkey.

As we add tens and then hundreds of millions of electric vehicles to the road in the coming years—waiting 18 months for evaporation to work just isn’t going to cut it.  DLE is the best way forward.

Lithium producers see the coming deficit in supply, and are already investing in juniors to secure a guaranteed source—at any price.  Lithium South already has such a partner—a private Chinese producer named Chemphys.

Chemphys has their own DLE process, and they just DOUBLED  the lithium recoveries from Hombre Muerto North, previously achieved with evaporation:

This is great news for everyone.  Lithium South shareholders have TWO DLE processes under testing. To date, both have used a synthetic brine to achieve the published results. The next testing step is a bulk brine sample from the salar  .  Chemphys wins as it has the offtake reserved from Hombre Muerto North–so if Lilac’s process is superior and wins out, Chemphys gets more lithium anyway.

That is HUGE!  LIS has such a quality lithium resource that they were able to get a Chinese partner to work Hombre Muerto at their own cost!

By the way, I have spoken with Alison Dai, daughter of the owner of CHEMPHYS.  They are deeply involved and think very highly of the project. 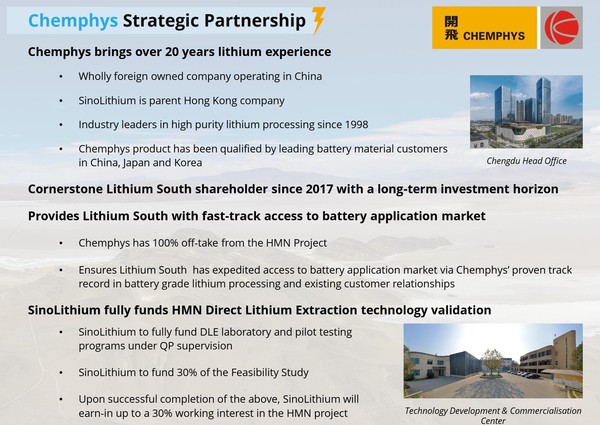 Also remember, Korean giant POSCO is developing their 25,000 tonne per year LC project immediately contiguous to the LIS ground. It is rare in this industry that a mining project goes to production without the developer owning the entire resource?

The Final Piece – New Data Not In PEA

Lithium prices are rocking.  Lithium South now has TWO groups showing they can get GREAT recoveries from their brine.

Now……there is even more to that valuation story.

The $217 million after-tax NPV is based on a conventional salar evaporation pond development.  A conventional development model cash flows way out into the future after an 18-month evaporation period AND also assumes only a 40% recovery of the lithium resource in place.

Those assumptions could be history.  I think it’s fair to expect that management will do a new Preliminary Economic Assessment for  Hombre Muerto North—utilizing whatever DLE technology they choose – and that could  enhance the current economics as recoveries will likely be higher.

Capital costs and operating costs are yet to be defined, but for sure the environmental impact of not having large evaporation ponds will bring LIS a lot of kudos from the ESG crowd (who know nothing of this story).

CONCLUSION—LITHIUM SOUTH
IS MY BEST IDEA IN BEST SECTOR

Lithium is the most bullish commodity for the next decade.  Global demand will be driven by a stunning increase in EV sales in the coming years.  Benchmark Intelligence is the world guru on lithium facts—they expect lithium to go into deficit starting late 2021 and remain that way for several years.

Lithium prices are already starting to price that in.  Producers like Chemphys are willing to go WAY down market to the junior developers to secure future supply at any cost.

Look, society wants battery fuel technology.  Governments are mandating it around the world. This is one of the biggest mega-trends of the next 10 years.

And lithium prices are just starting to move up.  I think there is a long way to go.

I see DLE as the best future for lithium.  I see Lithium South as the best stock to play this bullish trend within a bullish trend.  Funded. Quality resource. Partnered, focused on using new technology to change an industry. Early stage results that are impressive. Further work just starting. The news ahead for LIS could prove to be very exciting.


Mr. William Feyerabend, a Certified Professional Geologist and a Qualified Person under NI 43-101, has reviewed and approves of the technical disclosure contained within this article.