Royal Fox Gold (FOXG:TSXV) is the five cent stock where management and board bought the entire last financing—and drill results are ready to start flowing.

Royal Fox is for sure a grassroots play at five cents per share—but Chairman Victor Cantore started his Amex Exploration (AMX:TSXV) at 7 cents and it went to $3.90.

And Simon Marcotte’s last play – Arena Minerals (AN-TSXv) went from 2 pennies to 65 cents on massive volume as they developed their lithium brine play in Argentina.

Both these gentlemen know how to build shareholder value.  They are able to source valuable properties—and not only pay for them, but develop them.  Raising money for junior companies is not always easy—but these guys have done it consistently in good and bad markets.

And now they have set the stage again for investors with Royal Fox.  Just like Cantore’s AMEX, this play is in Quebec. Cantore, Marcotte and their team & board bought ALL of the last financing to pay for the winter 2022 drilling that is now complete—and results are pending NOW.

Heading up all that drilling is Adree DeLazzer, who discovered the 58 North deposit at Detour Lake on the Quebec Ontario border.  Her team increased the resource at Detour Lake by 10 million ounces of gold—ten million!!!

Drill results will be steadily coming out now for weeks and weeks.

I would expect to pay a huge premium for this team—but the stock is trading at five cents.

Their play—called the Philibert Project—is righ smack in the middle of what will soon be the province’s next big gold camp—just outside of Chibougamou.  The first buyout in this camp just happened last month (Genesis Metals was bought).

So the action is already starting. 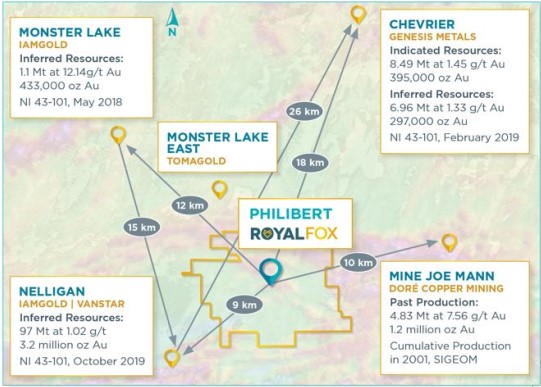 Philibert is at the mid-point of four large existing gold discoveries…three of which have posted resource numbers in the past couple years.

Philibert is surrounded.  This region is rich with gold.

IAMGOLD’s Nelligan project—discovered by Vanstar, (where Cantore is a director)—was the 2019 discovery of the year.  It already has a gold resource of 3.2 million ounces.  Nelligan sits just 9 kilometers away from Philibert.

The geologic structure discovered at Nelligan creeps up onto the southern edge of Philibert and offers exploration potential that is quite huge. 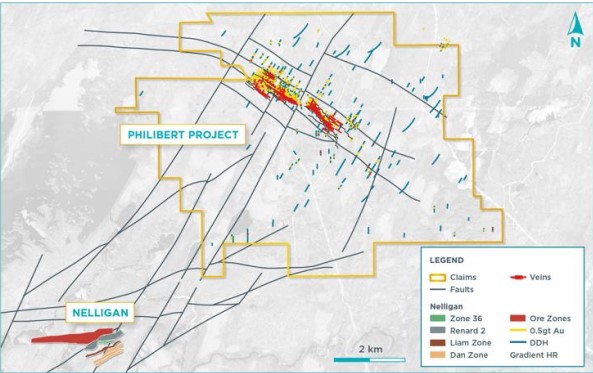 On the other side of Philibert, 10 kilometers to the east is the Mine Joe Man which has produced over 1 million ounces of gold and has more resource.

And to the northeast is another project with a new compliant resource of 395,000 indicated and 297,000 inferred ounces of gold.

With all of these discoveries—plus new resource estimates, it’s easy to see this turn into another one of Quebec’s fabled gold camps (think Noranda, think eastern Abitibi…). Two of these nearby deposits include some very high grades.

Royal Fox Gold and Philibert are in the dead center of all this.

Picking Up An Option At The Exact Perfect Time

Royal Fox’s timing was incredible. Marcotte and Cantore were able to secure an exploration project that already has 60,000 meters of drilling data in the bank AND $10 million in historical drilling spent on it—most of this work was done by SOQUEM, the provincial government body that promotes exploration in Quebec.

Just as Nelligan won Discovery of the Year, they were able to secure the large Philibert project just a few kilometres away and on strike.

Nelligan’s size—3 million ounces—means there WILL be milling capacity in this new camp.  That means FOXG’s Philibert can be a clear core pillar of what is suddenly is an emerging gold camp.

Combining the SOQUEM historical data at Philibert with the way Nelligan got discovered and developed—gives Cantore & DeLazzer a geological interpretation to follow for their own exploration.
That is interpretation not a promise.  But exciting, nonetheless.

The Gold Is There,
Now To Link The Foxes Together…..

The discoveries are all open at depth.  More importantly some of the foxes, or perhaps even all of the foxes–have the potential to join together to form one very large discovery.

Filling in the gaps between the foxes and expanding the resource size of what is already there also further at depth is going to add a lot of ounces as near-term drilling is rolled out. 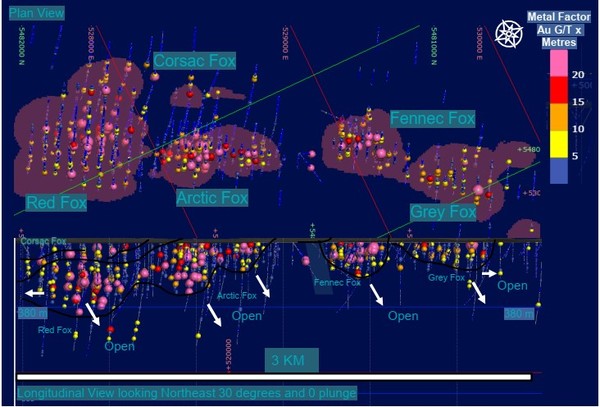 Any news that comes out that fills in these gaps is going to be very positive.

Anything that connects these foxes—especially the larger Red Fox and Arctic Fox—is going to mean that very small dollars will have been spent to create some very large resource numbers.

The big vision between the Red Fox and Arctic Fox specifically is to create one super-mega-jumbo open pit.

Connecting these existing gold deposits and also extending the strike out in both directions will be DeLazzer’s focus in the coming weeks and months. It is 3 kilometers long now but is believed to extend outwards in two kilometers on each side.

Eventually these will also head downwards to target higher grade at depth.  There is so much potential for a large gold deposit here.

Now, a big drill campaign has just been completed.  Results will start coming out very soon—and keep coming, all through the year.

The Royal Fox team—flush with success—has been biding their time and staying out of the limelight until now.  They did not want to waste any money-making noise about this story until after their first drilling program.  Now they are ready to start producing a steady stream of results.

I don’t know what the news from drilling is going to——but what I do know is that Marcotte, Cantore, DeLazzer and other management and board members personally took all of the last round of financing for themselves.

What more could you want?

5 cent stock.  Insiders gobbling up every share.  Project in the middle of a rapidly growing gold camp that just had its first buyout.  All brought to you by a team who recently had a 30 bagger (Arena Minerals) and a 50 bagger (AMEX).

The next set of drilling results is very soon. Be ready.